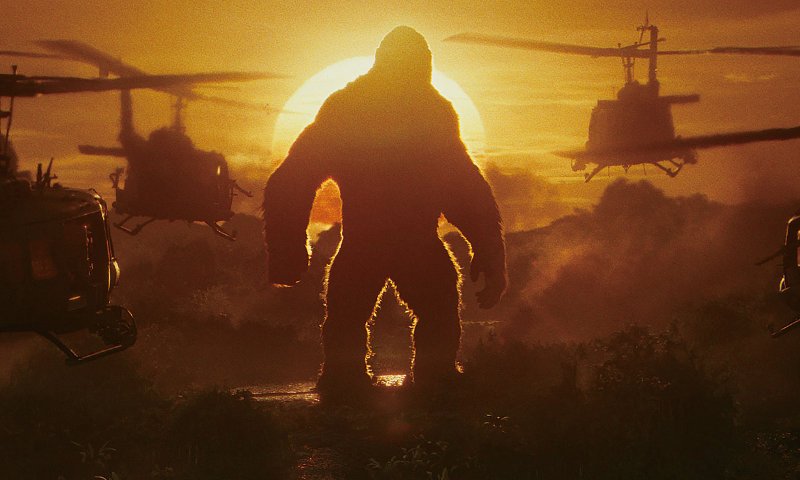 Walking into the theater to see Kong: Skull Island, I had no idea I was about to watch a “period film.”

I’d seen glimpses of the trailer, with helicopters and explosions and all that good stuff, but otherwise I hadn’t paid too much attention. After all, what else did I need to know?

I knew it was a King Kong flick, a modern monster movie. It wouldn’t veer off into any unexpected directions. Imagine my surprise, then, when I discovered it was set in the 1970s, right at the very end of the Vietnam War.

Now imagine everything that goes with that — the anti-war songs, the Richard Nixon bobbleheads.

You know, the usual.

The film begins at a running pace, following Bill Randa (John Goodman) and his colleague Houston Brooks (Corey Hawkins) as they put together an operation to venture into the mysterious Skull Island, with the alleged intention of performing a geological survey. But we, the audience, know all too well what kind of lie that is.

They recruit a tracker, James Conrad (Tom Hiddleston), and together with anti-war photographer Mason Weaver (Brie Larson) and a helicopter squadron led by Lieutenant Colonol Preston Packard (Samuel L. Jackson), they head out on their fated journey.

Battle of the Kongs

Kong: Skull Island is certainly a different film compared to 2005’s Peter Jackson-directed King Kong. For one, King Kong was an epic 187 minutes, beginning and ending in New York City, a re-imagining of the classic 1933 version.

In contrast, Skull Island runs 118 minutes, and has a much smaller scope. It focuses predominantly on its namesake, that mysterious island surrounded by violent, perpetual storms.

Outside of the time period and a few interesting character bits – Randa, Brooks and their investigations into the Hollow Earth and what Randa calls Massive Unidentified Terrestrial Organisms, and the bitter back and forth between Mason and Packard, who believes pacifists like Mason cost them the war – once we get into the jungles of Skull Island, what we find is a fairly traditional monster movie.

In fact, I’d go so far as to compare this film with one of my favorite classics: 1954’s Creature from the Black Lagoon. Here, you have a group of people venturing into unknown territory (Skull Island/Black Lagoon), only to come face to face with a creature (Kong/Gillman) who’s really just trying to protect his home.

What we’ve got here is a failure to communicate.

And Kong – there’s no hiding the “monster” in this monster movie. Kong makes his presence known right out of the gate, and is always waiting around the next corner.

Skull Island also doesn’t take itself too seriously. I had some reservations going in, given what little I’d seen of the trailers. A lot of movies these days, even ones with fantastical settings and ideas, try to be too realistic and, dare I say, dark. Here, though, Skull Island really does have a lot more in common with those older monster movies, right down to the cinematography.

If nothing else, the film has some great shots. There’s one, I believe it was near the end, where Kong himself is standing under the stars, looking down with the moon right over his shoulder. Just little scenes like that really caught my attention.

The appearance of John C. Rielly as the stranded survivorman Hank Marlow, who’d been trapped on the island since World War II, also added to the lightheartedness of the film, with just a touch of gallows humor.

Where Are We Going?

That’s not to say Skull Island was perfect. I wouldn’t classify it as the greatest film I’ve ever seen. There wasn’t anything new, here. But it didn’t have to be a masterpiece. It accomplished what it set out to do, and compared to other monster movies I’ve enjoyed over the years, I thought it was just as entertaining.

The only problem, otherwise, was that lingering thought in the back of my mind. That name.

By the end of the film, I wasn’t entirely sure how I felt, because I knew there was more coming. Skull Island is meant to set up Kong as a future adversary of Godzilla in the upcoming Godzilla vs. King Kong in 2020. 2019 will see Godzilla: King of the Monsters, and who knows what might happen before then.

There’s even a Wikipedia page for the new Warner Bros./Toho “MonsterVerse.”

Now, admittedly, my monster movie knowledge is rusty and, in many cases, lacking (one of the main reasons I’ve opened this website is to dive deeper into these genres). My favorite Godzilla monster is King Ghidorah. Cloverfield, of all things, got me started with blogging way back in 2008. And, most importantly, I think Godzilla would wipe the floor with Kong, even though I like Kong more.

You just can’t counter radioactive laser breath. Not in my cinematic universe.

Then again, I imagine Kong and Zilla will, by film’s end, team up to defeat some greater evil. They always do, these days.

Overall, I enjoyed Kong: Skull Island and its classic-esque direction. And however they turn out, I’ll always be there for the next monster battle.

Between Mortal Kombat and the Injustice series, the team over at NetherRealm Studios likes to mix things up. They added the Teenage Mutant Ninja...

Sometimes I miss stuff, so I’m starting a [Weekend Wrap-Up] series where I just throw things out at you that I either missed or...