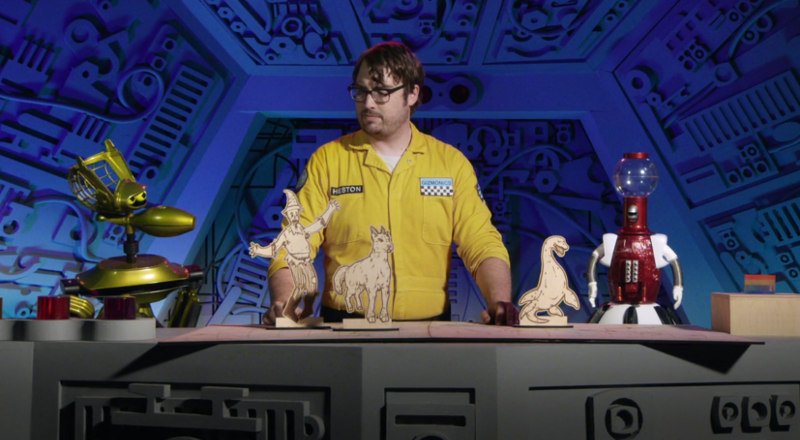 TURN DOWN YOUR LIGHTS
(WHERE APPLICABLE)

I remember, long ago, falling asleep to episodes of Mystery Science Theater 3000 on Comedy Central. The first one I ever saw featured Village of the Giants, a goofy film “inspired” by H.G. Wells’s The Food of the Gods.

Trust me, we’ll get to that later.

The whole thing was kind of an “instant classic” for me — it just oozed personality, with Joel (and later Mike) and his two robot friends mocking just the kinds of movies I was into. Total schlock, more often than not science fiction. Bad, but usually in a good way.

If you were to ask me some of my favorites, I’d say Werewolf (pronounced Worwilf), Future War, and Warrior of the Lost World (which actually has a killer main theme). A lot of them, really.

So you can imagine how excited I was to see Mystery Science Theater 3000 making a comeback this year.

In the not-too-distant future…

Most of what I liked about the original show is here. It’s got that high-quality low-quality thing going on, with handcrafted sets and spaceships. Within the first five minutes, we’re introduced to Jonah Heston (Jonah Ray), the new test subject, and the two new villains – Kinga Forrester (Felicia Day) and TV’s Son of TV’s Frank (Patton Oswald).

I have to admit, though – I really miss Kevin Murphy as Servo. His voice is just too distinctive, and it fit the character perfectly. Then again, both Crow and Tom have had multiple voices before this, and things change.

Not everything has changed, though. Despite being on Netflix, the new MST3K keeps a lot of its heritage in mind. It plays out as if it were still on television (in some ways it still is, I suppose), asking viewers to turn the lights down and occasionally breaking for commercials that thankfully never come. Jonah reads some fan mail, and there’s even a quick invention exchange.

Speaking of Jonah, I think he’s all right. As Jiminy Glick would say, there’s a certain blandness to him that I find appealing, but not too interesting.

That’s generally how I feel about this first episode as a whole. Watching it, personally — and this could just be nostalgia talking — it felt like old MST3K. But, you know, new. During Reptilicus (1961), some of the riffs came a bit fast, some of the delivery felt a bit off, but generally I thought it fit in very well with what came before.

It also didn’t make me think too hard, which I like. I could sit back and just, really, relax.

All in all, if episode one is any indication, the new season of MST3K should be a good time. The whole first season is available to stream right now on Netflix.