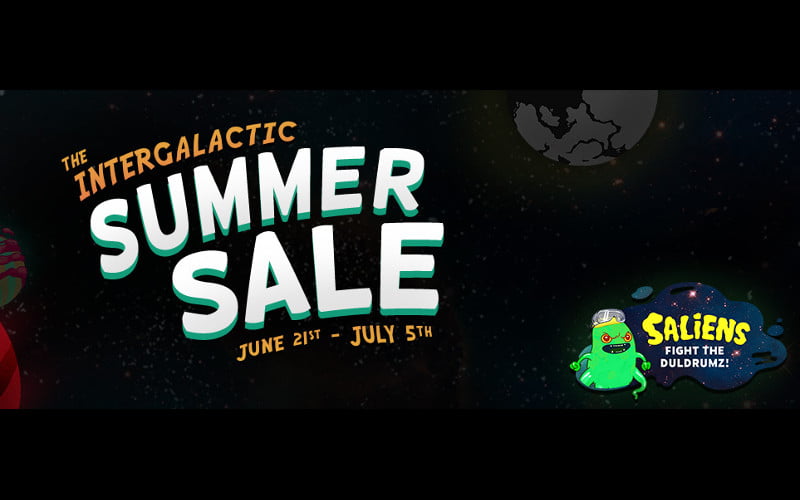 Steam’s Intergalactic Summer Sale is upon us!

Now, the store might be laggy as all get out, and the sales not as fun as they used to be (RIP Flash Sales), but there’s still a ton of stuff worth checking out.

With that in mind, here are a handful of Atomic Lagoon’s recommendations for games currently discounted on Steam, each with a splash of SciFi, Horror, or general weirdness. In no particular order:

CONSORTIUM – $4.99 – When I first played this, it was kind of a bug-ridden mess. But I’d like to think, after several years, that it’s been all patched up, because it really is an interesting little game, especially for a fiver. It can also be pretty meta. Bonus: Its score is composed by Jeremy Soule, perhaps best known for his work on Knights of the Old Republic and the Elder Scrolls series.

The Deadly Tower Of Monsters – $2.99 – A pretty cool game that lets you play through a 60s SciFi B movie as the “director” commentates in the background. It’s got robots, dinosaurs, giant apes. A hidden gem at this price.

Distance – $13.39 – I Kickstarted this one however many years ago. It’s a trippy futuristic racing game similar to San Francisco Rush 2049, and an evolution of the free-to-play Nitronic Rush. It’s very cool and has a lot of style.

Robot Roller-Derby Disco Dodgeball – $1.99 – You play as a robot and throw balls at other robots. Full bot support, by the way, if you prefer to go solo. Pretty good Tron vibe.

Tank Universal – $0.99 – Another game that gives off Tron vibes. This one’s hard to describe, though. It’s a kind of first-person strategy/battle game where you play as a tank, battling other tanks and taking nodes. Mixed reviews on Steam, but I think it’s easily worth a shot for $1.

Arma 3 w/ Mods! – $13.59 – I’ve been a fan of the Arma series ever since it was called Operation Flashpoint. Arma 3 in particular, though, has some pretty interesting mods, like one that adds velociraptors, and another with War Of The Worlds-style alien invasions. It’s got a campaign and online modes like the others, but I’ve always had the most fun designing my own scenarios. Things get weird.

Contrast – $3.39 – Before they started working on We Happy Few, and well before they were acquired by Microsoft, Compulsion Games released this short but entertaining game in which you manipulate shadows to complete puzzles. It’s stylistically nice, and the soundtrack is amazing.

Depth – $4.99 – Now here’s a fun multiplayer shark game that you can play online or off (with bots), with regular updates and, hey, a Megalodon hunt mode! In a normal game, two players take the role of sharks, while four others play as underwater treasure hunters. It’s a pretty good game to just pick up and play now and then.

E.Y.E. Divine Cybermancy – $2.99 – I hesitate to put this on my list here, because it’s not a game I can necessarily recommend, not in the traditional sense. But it’s something. It’s weird, a bit unwieldy, a bit hard to follow. I honestly can’t explain it. Just take a look at its Steam page, maybe that’ll tell the story. It’s like an absurd cyberpunk fever dream. That’s how I remember E.Y.E., anyway.

Fallout: New Vegas – $3.29 – You probably hear people say this a lot, but Fallout: New Vegas is easily the best, story wise, of the modern Fallout games. The possible branches and alignments make for a compelling journey through the Mojave Wasteland, and really opens the game up to multiple playthroughs. The DLC, as well, adds some extra weirdness, and is probably worth the extra $6.

Bioshock Series – $6.59 to $7.49 – Possibly my favorite video game series. I’ve played the first Bioshock many times. Bioshock 2 is a nice remix of that with a pretty interesting villain on top. And Infinite is one of my all-time favorite games period (I know, I know — controversial opinion). Though, if you like how Infinite ends and think it’s a good place to close out the series, I’d actually recommend avoiding the DLC, Burial At Sea.

The Secret Of Monkey Island & LeChuck’s Revenge – $3.39 each – The Monkey Island series is one of my favorites, and the two special edition remakes of Secret and Revenge are pitch perfect; you not only get updated visuals and voiceovers, but you can turn all that off with a simple button press and return to the good old DOS days.

Dino D-Day – $0.99 – It’s dinosaurs in World War II. Think of it as a more historically accurate version of Day of Defeat.

Remember Me – $5.99 – This was one of my surprises of 2013. The gameplay is fine, but what really pulled me in was the amazing design of Neo Paris and that killer music. The whole game really triggered memories of, say, Total Recall and other 80s SciFi movies. While the story is a bit weak in places and the ending is a total wash (IMO), everything else is just a fun trip.

Bionic Commando 2009 –  $1.99 – A lot of people didn’t enjoy this when it first came out, but I’m happy to see that 2009’s Bionic Commando has a Mostly Positive rating on Steam. If you can get used to the swinging controls and are okay with a truly absurd story line, you might just enjoy it. It’s really like the perfect video game equivalent of a B movie. I’d buy that for a dollar.