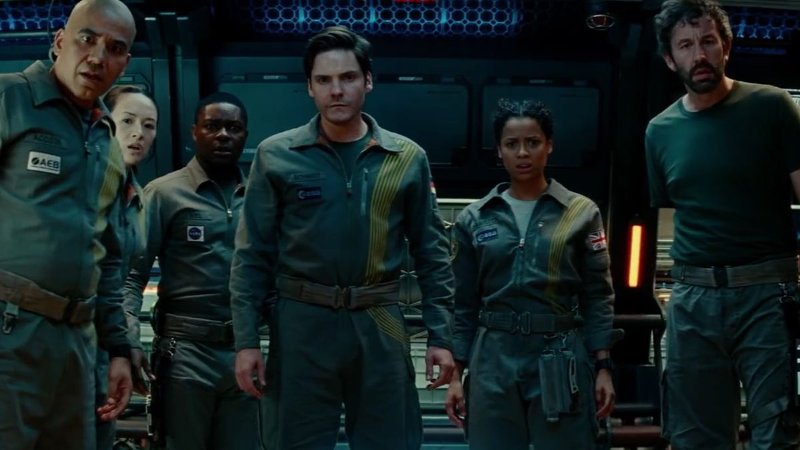 The Cloverfield Paradox is one of the weirdest movies I’ve ever seen. A kind of higher-budget-but-not-quite-ready-for-theaters affair, with so many random twists and turns that, at certain points, I wondered if the whole thing wasn’t some kind of Netflixian joke.

Well, here are my thoughts.

During this year’s Super Bowl, Netflix pulled the equivalent of an E3 conference game reveal — it was like Reggie Fils-Aime out there on stage saying, “Hey, that cool game we just talked about? It’s available on the eShop RIGHT NOW.” Only in this case, it was a movie straight to Netflix, available right after the game.

Has that ever been done before? It was an interesting move. One minute you’re speculating about The God Particle, the next Paramount’s renamed it, sold it to Netflix, and thrown it on streaming.

2. Almost Lost Me There

But did the movie live up to the trailer? To all the speculation?

I’ll tell you the truth: I found the first three minutes almost painful. I checked my email. I hit Reddit. At right about the three minute mark, I almost shut the whole operation down. I mean, I’m watching this on my laptop, Netflix, my attention span only goes so far.

Two people in a car. They’re talking, shot in a way that evokes the indiest of independent films. I’m certainly no movie snob, but as a follow up to 10 Cloverfield Lane, the drop in quality is abrupt and unexpected.

I did like TCP’s opening credits, that unsettling music over scenes of the crew hanging out, working on the Shepard. That got me excited. Felt a bit ominous, even.

3. Not What I Thought It Would Be

But we forge onward, beyond the credits and into the meat of the film. And then, things get weird.

Ever since I first heard about The God Particle (the name previously attached to TCP, before it really had anything to do with Cloverfield at all), I was insanely intrigued. The crew of a space station (maybe on the ISS) find that Earth has disappeared, and they’re screwed? What’ll happen next?

That’s what I thought this movie would be. I thought it’d involve scientists on Earth (maybe at CERN’s LHC or Fermilab) accidentally opening up a black hole or creating killer strangelets that eat the entire planet. Meanwhile, the movie would follow the space station crew as they try to figure out what the heck just happened.

If you can’t tell, for whatever reason I just thought The God Particle would be a bit more grounded. And even after a shaky start, one scene in particular almost had me convinced this film would be different. Almost.

4. Missed It By That Much

When the Shepard crew first hears that banging in the walls, and then the screaming, and they find Elizabeth Debicki fused with the internal wiring of the station, I thought, “Hey, that’s legit disturbing!” Like something out of the Philadelphia Experiment, a jarring moment that twisted The Cloverfield Paradox into genuine scifi horror. She was screaming and clearly FUBAR, and honestly I thought her character was toast right there.

In fact, I would’ve preferred it.

But nope. A few minutes later, she’s fine and walking around and I could feel the tension and horror fizzling out into my half-eaten bowl of popcorn. Nothing else in The Cloverfield Paradox would reach nearly as high as that one moment. It was like we got a brief flash of an actual parallel universe in which this movie is legitimately good.

5. Nothing Makes Sense, And It Doesn’t Matter Anyway

Whatever. She’s not dead. She’s a member of the Shepard crew in let’s call it Universe B. Fine. We’ve moved past it.

But around this point, things really go off the rails.

See, they did something interesting with Debicki’s character, Jensen, when she wound up in that wall. They played with spatial dimensions, even though it ultimately didn’t make much sense that she’d teleport to the same location as Universe A’s Shepard, while Universe B’s Shepard crashes into the ocean…but, forget that.

At first, I thought the two stations had fused together, or maybe A’s station overwrote B’s, and we’d see traces of other crew members from Universe B, showing up fused with walls, or floating in space, or maybe even mashed together with one of A’s crew members to form some kind of parallel universe abomination (which is what I thought they were going for with the Russian, Volkov).

I don’t know. That business with Debicki made me think, for the tiniest moment, that we were in for a different kind of parallel universe movie, one that went for a more realistic, or at least a this-could-actually-happen-if-worlds-overlapped approach. Not so.

It’s like TCP wanted to go in interesting directions, but instead decided to make the weirdest decisions possible. Maybe the writers just gave up, or decided to go the easy route, because from that point onward, things just kind of happened with no established rules to follow. I mean…

7. The Inconsistent Threat of a Parallel Universe

At one point, Chris O’Dowd’s character, Mundy, quips that he doesn’t “know what the rules are, anymore.” It was at about that time, when his disembodied arm from another universe, encased in glass, started writing on a piece of paper, that I too began to realize The Cloverfield Paradox had left me behind.

I can’t, off the top of my head, think of any other movie that has made me stop and ask, “What is happening right now?” I’m usually pretty good at suspending disbelief and going along for the ride. Really, I don’t tend to overanalyze films. I promise. But the questions. The questions. I could list so many questions, but I’ll spare the bytes. Suffice it to say, hardly anything in The Cloverfield Paradox makes sense.

There’s a theory I read about what was happening in the movie, but it only just barely manages to explain some of the oddities. It’s that the two space stations, from Universe A and Universe B, are actively merging together throughout TCP, and this is what causes things to get so weird.

The water flooding the chamber is the ocean water at the sinking station. The magnetized wall is magnetized from a ship on Earth lifting the wreckage out of the ocean using a magnet. Mundy’s arm going through the wall is because said wall was destroyed when the station crashed. Volkov filled up with worms because…well, that’s where it all falls apart, isn’t it? Still no explanation for the intelligent arm, either.

Anyway, I share this theory for no particular reason. I just thought it was interesting.

The original Cloverfield is actually one of my favorite films. Well, let me amend that: I had fun with its ARG and speculating about the monster back in 2007. Was it Cthulhu? A huge lion? Was it Rampage? Who knew?!

The movie itself was okay. I enjoyed it.

After Cloverfield released, speculation continued about a possible sequel. That never really happened, but then 10 Cloverfield Lane showed up, and J.J. Abrams started talking about using the Cloverfield “brand” as a kind of masthead for a theatrical anthology series. That, I thought, sounded pretty good, especially after Lane proved to be a very solid flick, arguably better than Cloverfield proper.

But now we come to The Cloverfield Paradox, which has, paradoxically, sucked the anthology idea right out the proverbial space station hatch. Now, it’s a connected universe. Now, it’s all related. The next film, tentatively titled Overlord, promises to connect, as well.

Like Universal’s shared Dark Universe, I’m just not sure we’re heading in a good direction with this. Move on from TCP, ignore the shared universe tie-in (just because a giant monster shows up doesn’t mean it has to be linked to the original Cloverfield, that’s not at all spelled out in the movie, like so many other things), and continue on as an anthology. We can still do this!

Or not. It’s your series.

TCP has sparked a lot of discussion about the current state of movies, and how Netflix is seemingly taking over for the good old Direct-to-VHS releases of yore. Bright is also mentioned in that sense — films that are higher budget but not necessarily a good fit for theaters.

I think that’s about right. TCP would’ve been annihilated at the cinema, and despite pretty good acting (I have no complaints whatsoever about the cast), directing, and so on, it doesn’t quite reach the level of a theatrical release. There’s quite a lot missing.

That said, The Cloverfield Paradox isn’t the worst movie I’ve ever seen. It is one of the weirdest, and most unfocused. Just too much random stuff happening with no rhyme or reason, no payoff, no clear idea. I’m glad Netflix snatched it up, and I was able to watch it premiere right at the comfort of my computer screen. It’s definitely worth a watch for anyone into weird scifi.

The rough reviews are, however, extremely justified.