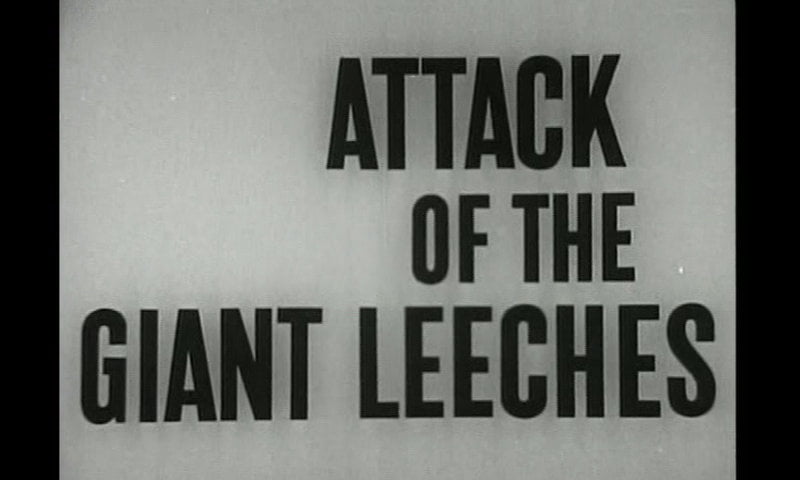 Every October, I try to watch as many monster movies as I possibly can. I usually aim for one a day.

Today’s movie, chosen out of mild laziness for its cool runtime of only 62 minutes, is 1959’s Corman Brothers-produced Attack of the Giant Leeches. And if laziness was my goal here, I couldn’t have chosen better, because it didn’t leave me with a whole lot to say.

Leeches is an innocuous film. It’s inoffensive, and maybe a bit goofy. But it commits one of the Cardinal Sins of movie making: It’s boring.

It’s the classic story of wife cheats on husband, husband chases wife through swamp with shotgun, wife gets kidnapped by giant tentacled monsters. Tale as old as time.

And that’s really all there is to it. Game Warden Steven Benton (Ken Clark) and his best girl Nan Grayson (Jan Shepard) set out to find the source of Liz’s disappearance, and, well, you know how these things usually end. The leeches themselves don’t have a whole lot of screen time, and the only hint we get about their origins is a final comment at the very end — seemingly tacked on for the sake of SciFi— about Cape Canaveral and atomic radiation.

If I’m to be completely honest, the main reason Leeches was on my pile of monster movies to begin with was Yvette Vickers. I find her a bit interesting, and not just because of her tragic end. Earlier this year, I caught an interview she did later in life with Skip E. Lowe. She’s probably best known for her role as Honey Parker in one of my favorite cheesy B movies, Attack of the 50 Foot Woman.

Final Verdict? Leeches isn’t the worst film I’ve ever seen. That is yet to come. But it’s unremarkable, and probably an easy pass for anyone but the biggest of monster movie fans.

In this article:B-Movies, Science Fiction