On the surface, 1962’s Invasion of the Star Creatures looks like any other scifi B-movie. Its poster evokes classic Atomic Age outer space shenanigans — women imprisoned in transparent tubes while a monstrous creature carries one away, and spaceships blast off in the distance. The tagline even evokes something ominous and, dare I say, exciting.

“Evil…beautiful…deadly…in their eyes desire…in their veins the blood of monsters!”

But when a movie begins with credits calling it “An Impossible Picture” presented by R.I. Diculous, you know that whatever follows is not to be taken seriously. 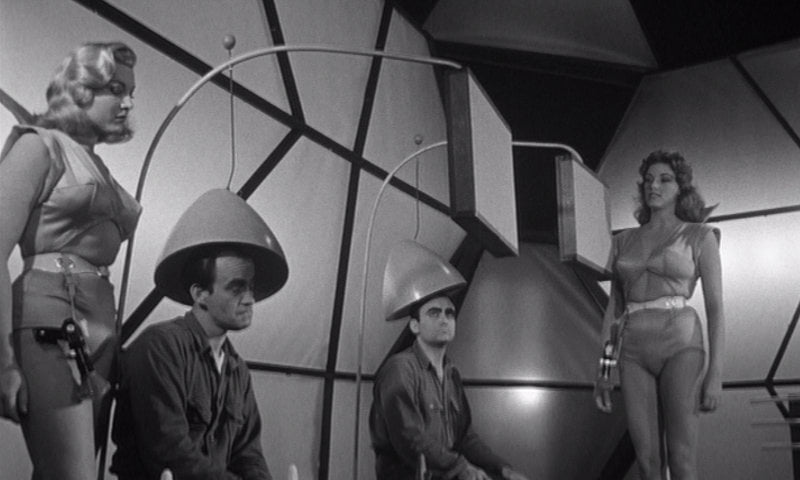 Still, its basic story fits the bill. A nuclear test explosion opens up a cave out in the desert, and a ragtag group of soldiers head out to explore it. Why? Because that’s what you do when you find a cave – you climb on down and see what’s in there, ya dig?

Most of the soldiers get taken out by towering carrot-like monsters, leaving the two least qualified of the bunch (Robert Ball and Frankie Ray as the professional numbskulls Penn and Philbrick) to venture into the cave alone. What they find is an alien spaceship, a group of violent vegetable people, and two 7-foot-tall Amazon women (played by Gloria Victor and Dolores Reed) from the planet Kalar, 600 million light years away.

That’s when the aliens reveal their nefarious goal: They’ve been stationed below the Earth for 10 years, collecting data for a coming planetary invasion. And they’re just about to call in the cavalry…

Star Creatures is goofy, almost embarrassingly so. It reminds me a lot of Attack of the Killer Tomatoes, something thrown together on an extraordinarily low budget. It’s the kind of thing that was probably just made for a laugh, or a joke among friends.

There are gags and impressions, sure. But while it seems to be a parody of the scifi schlock of the day, it’s hard to confidently label it such because little of its comedy actually targets the genre itself.

Unless the parody is in the production value, in which case mission accomplished.

I mean, I don’t begrudge anyone for having some fun, and bad movies can be good. Many bad, terrible movies are very fun to watch. But you have to try pretty hard to squeeze the good out of something like Star Creatures.

There’s a difference between trying and failing, and failing on purpose.

And yet there are funny moments. The Space Commander Connor’s secret ring gag makes me laugh every time. I can’t help it. It’s just so stupid. And some of the other quirks, like the existence of an Electro-Foffilagraphalohofomatic. The way Dolores Reed delivers that line, with the utmost seriousness, is perfect.

The real hilarity, though, comes from the film’s fundamental technical problems. The editing is janky. Scenes end too soon. Transitions are choppy. Audio cuts out randomly, and annoying sound effects litter sporadic attempts at comedy. Some scenes could have used multiple takes, as well, especially one halfway through, during which Gloria Victor (I believe) temporarily forgets her line.

The Vege-Men — the only real creatures in Star Creatures — are also very special, indeed.

They’re featured on the DVD menu, colorized, with green hair (like leaves) and brown bodies. In the trailer, they’re described as “gigantic man-like robots,” while on the back of the DVD case they’re called “VegeMonsters.” In the film, they are “”Vege-Men,” humanoid vegetable monstrosities grown in pots.

Their costumes, the DVD case reads, were made of “stockings, burlap bags, and Ping-Pong balls.”

And believe me, when they first pop up on screen, they look so laughably cheap that it’s actually kind of adorable.

The cast of Invasion of the Star Creatures does well enough with what they’re given. I hesitate to write that.

We have Bob Ball and Frankie Ray as our two protagonists (though I’ll admit I found Ball’s high-pitched whininess a certain kind of annoying). Mark Ferris, in what might be his only acting credit, plays Colonel Thomas Awol, easily the most entertaining and comedic of the bunch. And then we have Gloria Victor and Dolores Reed as the film’s titular Star Creatures (Billed as Wow! and Wow! Wow!, which I guess is fair).

I’m not going to lie to you — I don’t really like this movie. It has its moments, especially when our evil alien scientists are giving us a tour of their secret lab. Those are classic scifi tropes in action. But those moments are brief, and are all but gone by the time we hit the third act (the film isn’t particularly good to begin with, but eventually it decides to literally sit down and get drunk).

All of that said, I’m a sucker for old scifi schlock, and against my better judgment I’ve watched this movie three times. I wouldn’t own a website about old monster movies and science fiction if it were any other way. So I give Invasion of the Star Creatures a single full star just for the aforementioned schlock, goofy special effects and editing, and the laughingly low-budget creativity behind the Vege-Men.

In this article:B-Movies, Science Fiction